Judge Hammermann speaks at the University of Innsbruck

On 4 and 5 April 2019, Judge Bernd Hammermann spoke at the University of Innsbruck at a conference entitled “25 Jahre Europäischer Wirtschaftsraum – Ein Integrationsszenarium auf dem Prüfstand,” marking the EEA Agreement’s 25th anniversary. Judge Hammermann provided a view from the EFTA Court on the panel on “Gerichte und Kontrolle”. The other speakers on this panel were Bente Angel-Hansen, President of the EFTA Surveillance Authority, and Univ.-Prof. Dr. Peter Bußjäger, Judge of the Liechtenstein Constitutional Court and Professor at the University of Innsbruck. There were many other prominent speakers at the conference from both pillars of the EEA, as well as from Switzerland. These included, Ambassador Sabine Monauni, Liechtenstein Mission to the European Union, EFTA Secretary-General Henri Gétaz, Ambassador Univ.-Prof. Dr. Helmut Tichy, Head of the Department for International Law of the Austrian Ministry for Europe, Integration and Foreign Affairs, and Dr. Andrea Entner-Koch, Director of the Liechtenstein EEA Coordination Unit. Judge Hammermann also attended a reception hosted by the Principality of Liechtenstein, where Univ.-Prof. Dr. Hubertus Schumacher, President of the Liechtenstein Supreme Court, announced the establishment of a department for Liechtenstein law at the University of Innsbruck. During the conference, many of the EEA Agreement’s achievements were discussed. The insightful discussions provided an excellent overview of the current issues faced both in the EEA, and in Europe at large. 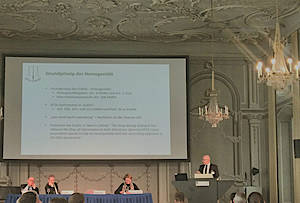